Adele & Greg Kurstin Team Up at No. 1 on Hot 100 Songwriters & Producers Charts 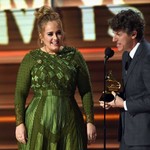 Adele and Greg Kurstin tie at No. 1 on Billboard’s Hot 100 Songwriters chart (dated Oct. 30), each leading for the first time thanks to their work on the former’s “Easy on Me.”

Kurstin also spends his first week atop Hot 100 Producers, as he solely produced the ballad.

Kurstin has a longstanding history on Billboard’s charts as both a writer and producer, including with Adele. “Easy” is his fourth Hot 100 No. 1 as a writer and producer, after Kelly Clarkson’s “Stronger (What Doesn’t Kill You),” in 2012, Adele’s “Hello” and Sia’s “Cheap Thrills,” featuring Sean Paul, in 2016. (“Easy” is also Kurstin’s first top 10 in those roles since Sia’s leader.)

In 2017, Kurstin won Grammy Awards for album, record, song and producer (non-classical) of the year for his work on Adele’s 25 and “Hello.”

As Kurstin leads both Hot 100 Songwriters and Hot 100 Producers, he is the latest talent to top the charts simultaneously. Kanye West doubled up in September, while Finneas, J. Cole and Dan Nigro are the only others to achieve the feat this year.

The weekly Hot 100 Songwriters and Hot 100 Producers charts are based on total points accrued by a songwriter and producer, respectively, for each attributed song that appears on the Hot 100; plus, genre-based songwriter and producer charts follow the same methodology based on corresponding “Hot”-named genre charts. As with Billboard’s yearly recaps, multiple writers or producers split points for each song equally (and the dividing of points will lead to occasional ties on rankings).

The full Hot 100 Songwriters and Hot 100 Producers charts, in addition to the full genre rankings, can be found on Billboard.com.