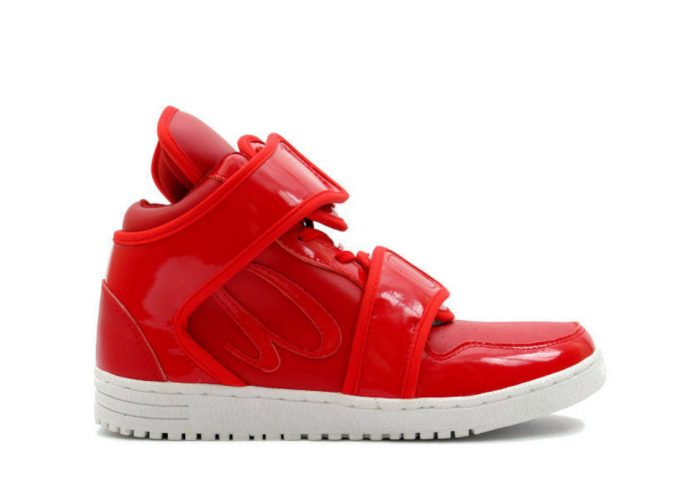 To the uninitiated, tomorrow’s adidas YEEZY FOAM RUNNER “Vermillion” drop might seem like Ye’s – the being formerly known as “Kanye West” – first time displaying an affinity for bold red footwear, but it isn’t.

The former presidential hopeful helped popularize all-red footwear in the mid-2010s by way of sneakers he designed or co-signed. As written in GQ in 2015, “red-on-red kicks have become more a scarlet letter of hype-beasting’ than a fresh style move,” but Ye is in another position to bring them back into the forefront of fashion and streetwear.

Ahead of the next YEEZY FOAM RUNNER release, here’s a look at Ye’s history with red sneakers.

While he surely owned red-accented footwear prior to 2007, the “DONDA”-creator sent countless netizens on a research frenzy when he wore a double-strapped pair of high-tops in the music video for “Stronger,” the second single off “Graduation.” Ye also wore the mostly-red sneakers during his Summer Jam appearance that year, which ultimately led the Internet to discover they were the Ato Matsumoto Cowhide Boots.

Designed in Japan and sold at retail for $500 USD, the pair never gained the mainstream attention of other footwear the adidas YEEZY-frontman has worn, but its influence on Ye’s taste has lasted the test of time.

With Nike’s help, the world was introduced to the first Air Yeezy on April 4th, 2009. Three months later, the man formerly known as “Mr. West” launched an all-red sneaker in collaboration with Louis Vuitton. Undoubtedly the most eye-catching of the six pairs Ye designed for the French fashion house, the limited low-top proposition has become one of the most sought-out shoes associated with the 44-year-old. Luckily, more ruby-colored styled have followed.

Whether you subscribe to them or not, countless trends from the last 20 years can be traced back to the being formerly known as “Kanye West.” Before everyone from your favorite celebrity to your next-door-neighbor became enamored with the Air Jordan 1, Ye was walking the streets of New York City and Paris in 2001-versions of Michael Jordan’s first signature sneaker. Throughout the early 2010s, the Nike Air Yeezy-designer occasionally took a break from rocking original colorways of #23’s first handful of models to wear general releases like the Nike Air Max 90 Hyperfuse “Independence Day.” Immediately, #fitpics everywhere showcased fans emulating Ye’s look at the time: a subdued wardrobe – commonly all-black – paired with an all-red sneaker.

Although the bold Air Max offering released first, it was reminiscent of the “Red October” design the Chicago-bred creative debuted in June 2013. Nike likely didn’t anticipate the AM 90 to become so coveted (pairs still commonly sell for 300% above their retail price on the after-market), but they capitalized on consumers’ hunger for all-red footwear. Over the year that followed, numerous Nike Sportswear models received a triple-red makeover – other brands joined in on the fun, too! And while fresh for the moment, these offerings were undoubtedly overshadowed by a particular pair.

February 9th, 2014 is a date that’ll forever live in infamy.

To the surprise of the Internet, the Swoosh released the third and final colorway of Ye’s Nike Air Yeezy II months after he announced he had partnered with adidas. The sneaker had been teased for months, having debuted during then-Kanye’s performance at Governor’s Ball in June 2013, and was thought to have been scrapped given that Ye had jumped ship before that year ended. Before he exchanged checks for stripes, “Mr. College Dropout” wore the “Red Octobers” throughout his promo run and tour for “Yeezus,” his sixth studio album. Ye was disgruntled with the Fashion (capital “F”) powers at play, and the polarizing collection of 10 tracks captured both his frustration and “I.D.G.A.F.” attitude of the time. Coupled with spiked leather jackets, decorative Maison Margiela masks and hefty Cuban link chains, the all-red Air Yeezy II helped the “Bound 2” rapper make a statement wherever he went.

Unquestionably one of the most popular pieces of footwear of the last two years, the laceless YEEZY will boast Ye’s first all-red design in seven years. The porous slip-on has favored tonal colorways, but “MX” stylings have demonstrated the model’s ripeness for experimentation. Production numbers for the eye-catching pair haven’t been disclosed by the brand, but it’s likely Ye’s first “Red October” offering with adidas will be more available than his effort with Nike. Three things are certain, however: 1. The “Vermillion” option has been long-overdue; 2. It will instantly sell-out; 3. The being formerly known as “Kanye West” has added yet another tally to his unrivaled legacy.