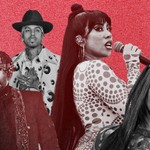 Rauw Alejandro, Bad Bunny, Kali Uchis, and more artists in their 20s have entered Billboard’s Hot Latin Songs chart more than once and/or have made chart history this year.

Our annual “20 Latin artists in their 20s” list is composed of 18 artists who have placed the most titles on the survey this year — plus two editor’s picks, Nathy Peluso and Paloma Mami, who have yet to enter the tally but are making a name for themselves.

Below, see the list in order of who’s placed the most titles on Hot Latin Songs in 2021.

The Puerto Rican artist — who won big at the 2021 Billboard Latin Music Awards, taking home 10 trophies — has placed 14 titles on the survey. One of his latest solo efforts, “Yonaguni,” peaked at No. 1 on Hot Latin Songs in June. El Conejo Malo is set to make his acting debut on Netflix’s Narcos: México, premiering Nov. 5, in which he’ll play Arturo “Kitty” Paez.

This year alone, Ozuna has placed 10 titles in the Hot Latin Songs top 20, including five tracks in collaboration with Anuel AA — as part of their joint album Los Dioses, which went No. 1 on Top Latin Albums and hit top 10 on the all-genre Billboard 200 albums chart. Ozuna is currently making the rounds with “SG,” a new collab alongside DJ Snake, Megan Thee Stallion, and Lisa of BLACKPINK.

With nine titles that made the Hot Latin Songs top 20, there’s no denying that Myke Towers is one of the hottest Latin rappers of the new generation. Towers raced to the top by adding his signature flow to major collaborations this year, including with Jay Wheeler on “La Curiosidad,” Wisin on “Mi Niña,” and Ozuna on “Caramelo.” Towers also nabbed best new artist of the year at the 2021 Billboard Latin Music Awards.

A multiple 2021 Latin Grammy nominee, Rauw’s ability to experiment with different genres outside the reggaetón realm has made him a viral sensation. So far, the Puerto Rican artist has placed eight titles in the chart’s top 20, including his Selena Gomez collaboration “Baila Conmigo,” and the groovy, feel-good summer anthem “Todo de Ti.”

The Panamanian artist continues to rank high on the Billboard charts, this year with his breakup anthem “911” and three key collaborations: “Volando” with Mora and Bad Bunny, “Una Nota” with J Balvin, and his newly-released “Sal y Perrea (Remix)” with Balvin and Daddy Yankee. Earlier this year, Sech also dropped his ultra-personal sophomore album, 42.

So far this year, Cortez has placed three songs on Hot Latin Songs, including his global smash hit with Bad Bunny, “Dákiti,” which spent 51 weeks on the listing and also crowned the Billboard Global 200 and Billboard Global Excl. U.S. charts. Signed to Universal Music Latin, Cortez had been building his cred steadily, opening for J Balvin’s Vibras Tour in 2018. Now, he’s making the rounds with Timelezz, featuring 17 tracks that go from hardcore reggaetón to dance to house to very introspective material.

The Colombian artist — who has notched two entries on Hot Latin Songs this year, and recently announced he’s having a baby with wife Evaluna Montaner via their “Índigo” collab — is a modern-day troubadour, making fans around the globe swoon through his romantic and achingly beautiful lyrics. With his Mis Manos album, released earlier this year, the singer-songwriter leads this year’s Latin Grammy nominations with his 10 nods — including in the all-important album, record and song of the year categories.

Nodal earned his first Billboard chart entry with “Adios Amor” in 2018. This year, the 22-year-old has placed two titles on Hot Latin Songs (so far): His Angela Aguilar-assisted “Dime Como Quieres,” and his history-making collaboration with Gera MX, “Botella Tras Botella” — which became the first-ever regional Mexican song to enter the all-genre Hot 100 in the chart’s 63 years of existence.

Firme’s “El Tóxico” with Carin León and their chart-topping “Ya Superame” scored them an entry on this list. The norteño and banda group made history over the summer as the first Latin act to perform the most shows in a single calendar year at the Staples Center in L.A. (the only other artist who has done more is Adele, with eight in one calendar year). Most recently, Grupo Firme became the third act to hit the Hot 100 with a regional Mexican song thanks to “Ya Superame.”

Two Wheeler tracks are making a buzz on the Hot Latin Songs chart, his viral hit “La Curiosidad” in collaboration with Myke Towers, and his melancholic reggaetón jam “Viendo el Techo,” which also earned the Puerto Rican artist his first No. 1 on Billboard’s Latin Airplay chart in April. Wheeler, who will soon release his all-English studio album, is nominated at the 2021 Latin Grammys, for best reggaetón performance and best urban song (both with “La Curiosidad”).

The Colombian artist, whose “Hawái” is up for song of the year at the Latin Grammys, recently wrapped up his coast-to-coast 30-date Papi Juancho tour in Chicago. So far, Maluma has placed two songs on Hot Latin Songs including “Sobrio” and “Hawái” with The Weeknd. In case you missed it, Maluma stars in our first episode of “12 House With,” which you can stream via Facebook Watch here.

One the youngest stars on our list, the Colombian artist has placed two titles on the Hot Latin Songs top 20: “La Nota,” with boricua stars Rauw Alejandro and Myke Towers, and “Mala Costumbre” with reggaetón veterans Wisin & Yandel — both part of his sophomore album, Dopamina. Turizo is currently making the rounds with his new single “Te Olvido,” which is accompanied by a very ’90s, early ’00s-inspired music video.

In the midst of the pandemic, Rosalía has opted to work in silence. Though she has yet to release new music, the Spanish songstress has recorded multiple collaborations, with Bad Bunny on “La Noche de Anoche” and Billie Eilish on “Lo Vas Olvidar,” both of which hit the Hot Latin Songs top 20. Currently, Rosalía is making the rounds with the infectious dembow-flamenco jam “Linda,” where she joins Dominican newcomer Tokischa.

Currently on tour with pos stars Enrique Iglesias and Ricky Martin, Yatra has so far charted two tracks on Hot Latin Songs: “Chica Ideal” with Guaynaa, which peaked at No. 13, and the Myke Towers-assisted “Pareja del Año,” which reached No. 10. Most recently, Yatra released his new single “Tacones Rojos,” an upbeat dance-pop love song that starts off with electric guitar riffs, followed by his plush and charming voice.

This year, the Mexican rapper not only earned his first-ever Billboard chart entry, but also made chart history with his Christian Nodal-assisted “Botella Tras Botella.” Born during a carne asada hang out in the midst of the pandemic, the urban ranchera track became the first Regional Mexican title to enter the all-genre Hot 100 chart in its 63-year history. In addition, the song also debuted at No. 3 on Hot Latin Songs and in the top 10 on both Global charts: No. 4 on Billboard Global Excl. U.S. and No. 9 on Billboard Global 200.

The smash hit “Telepatía” earned the Colombian-American singer-songwriter’s her first Hot Latin Songs chart No. 1 back in May. Thanks to the bilingual pop anthem, she became the first female soloist without an accompanying act to lead since 2012, bumping Bunny and Cortez’s “Dakiti” from No. 1 after 27 weeks. Additionally, Uchis’ Sin Miedo (Del Amor y Otros Demonios), which houses “Telepatía,” hit No. 1 on the Latin Pop Albums chart (dated March 6). The set — her first Spanish-language album — was also her first leader on any Billboard albums chart.

The Argentine newcomer up for best new artist at the Latin Grammys sharing the category with up-and-coming acts such as Bizarrap, Paloma Mami and Rita Indiana. Signed to 300 Entertainment, he 21-year-old artist is making a name for herself in the urban-pop scene and comes with a stamp of approval from artists such as Cazzu, Tini, and J Balvin. Most recently, she released her debut album Animal, which includes collabs with Becky G, Danny Ocean and Tiago PZK. This year, she entered the Hot Latin Songs chart thanks to her collab with Balvin, “Que Más Pues?”

With her soulful R&B-tinged vocals, unapologetic in-your-face lyrics, and killer dance moves, Nathy Peluso, born in Argentina, is marking territory in the music industry as Latin music’s next promising star. The powerhouse singer, who has collaborated with Christina Aguilera, Karol G, and C.Tangana, to name a few, is nominated for four Latin Grammys including best alternative music album with her eclectic debut album, Calambre.

It was the viral success of her independently produced single and video “Not Steady” that nabbed Paloma Mami a record deal with Sony Music Latin in 2018. And it was her debut album, Sueños de Dali – released earlier this year — that scored her first entry on the Top Latin Albums chart where it peaked at No. 32. Nominated for best new artist at the Latin Grammys, she recently released “Cosas de la Vida,” a slowed-down pop tune powered by a sparse drum beat.