HomeMusic10 Cool New Pop Songs to Get You Through the Week: Aly...
Music

10 Cool New Pop Songs to Get You Through the Week: Aly & AJ, Craig David & MNEK and More 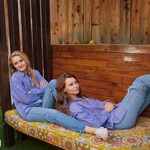 Another week is upon us, which means it’s time to press play on 10 Cool Pop Songs to Get You Through the Week. If you’re looking from some inspiration and sonic fuel, we’ve rounded up songs from Aly & AJ, Duran Duran ft. Tove Lo, Hippo Campus, Dreamer Boy ft. BENEE and Craig David & MNEK and others to help get you through another week.

Slide any of these gems into your personal playlist to get energized to take on the week – or scroll to the end of the post for a custom playlist of all 10.

Wet is back (and independent!) with the emotive pop that thrust them into the spotlight back in 2016, this time, with their most recent offering, Letter Blue. The album shines and envelopes the listener in a dreamy, synth-filled cocoon of sounds before hitting a sweet spot halfway through with “Bound.” Blood Orange blends seamlessly in both production and vocals — a nod to the collaborators’ total harmony on the track. – Starr Bowenbank

Hippo Campus isn’t new to having pointed lyrics in their songs, and “Boys” is proof — the new track sees lead singer Jake Luppen cutting into the messiness of one’s twenties with expert precision, starting off like a movie before gradually descending into a happy-go-lucky chaos by the bridge. – S. Bowenbank

Mild Orange, “The Time of Our Lives”

Mild Orange has mastered the art of making music for the nostalgic, as evidenced on “The Time of Our Lives.” The indie quartet reflects on a trip to Japan through rose-colored glasses, an understandable choice given the pandemic. Hints of shoegaze come together with the group’s self-described “melting melodies” for a concoction that’s satisfying enough to get swept up in. – S. Bowenbank

For this perfect summer closer, 28-year-old Australian musician/producer Alice Ivy teams up with fellow Aussie Sycco, a rising singer-songwriter who was up for the Triple J Unearthed Artist of the Year award in 2020. Ivy delivers a welcome dose of reverb while Sycco plays with repeated phrases, working together to ensure this one gets stuck deep in listeners’ heads. – Lyndsey Havens

As pop-rock duo Aly & AJ gear up to release the deluxe version of their stellar summer album a touch of the beat gets you up on your feet and then out and then into the sun, they continue to release even more inventive and edgy tracks with the latest being “Am I Alright.” The plinking riff and steadying drumbeat add vibrant color to the oftentimes dark question, “am I alright?” – L. Havens

Duran Duran ft. Tove Love, “Give It All Up”

Duran Duran delve into dark, moody atmospherics on “Give It All Up,” a highlight from their new LP Future Past. Even after four decades, the English hitmakers still have an ineffable alchemy together, and adding Swedish dark-pop chanteuse Tove Lo to the mix is a smart move that takes “Give” to the next level of melancholy pop bliss. – Joe Lynch

Synth-pop purveyor Ariana and the Rose and electro-infused rapper Cakes da Killa – neither one a stranger to the dancefloor – team up on “London Boys,” a thumping four-on-the-floor house banger about beautiful Brits that boasts an absolutely fire verse from Cakes. – J. Lynch

A gentle harp arrangement introduces this inspired pairing, as MNEK and Craig David find a meeting point between separate generations of radio-ready R&B. “Who You Are” is both understated and exciting, two pros delivering romantic deference and sidestepping unnecessary vocal theatrics. – Jason Lipshutz

Hope Tala’s rhythmic pop often flows so naturally that it’s not hard to overlook the intricacies of her songwriting. New single “Tiptoeing,” which was created with Greg Kurstin, presents itself as both easily developed and fussily mastered, with Tala’s tone offering comfort but the production and lyrics striving for a complex equilibrium. – J. Lipshutz

Ready for the “Circles” of this fall? “Are You Letting Go?,” the new team-up between Dreamer Boy and BENEE, nails the balance between pop and alt-rock crooning that Post Malone rode to ubiquity two years ago, as BENEE interacts with electric guitar riffs and channels the same type of charm that helped “Supalonely” become her breakthrough. – J. Lipshutz